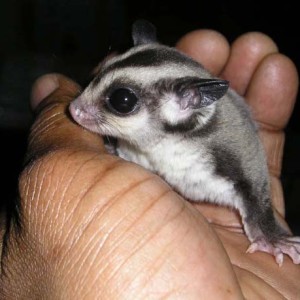 Any two gliders should be carefully introduced to each other because first impressions are lasting; even with gliders. There are a number of ways to go about doing this properly, but there are two methods that I favor. One takes about a week or less and the other takes two to three weeks to implement.

Although gliders under normal circumstance don’t injure each other caution should be used when introducing gliders because it is impossible to reliably predict how they will respond to each other. For two gliders that don’t have any obvious antagonism toward each other the shorter method will probably work just fine, but for two gliders that are openly antagonistic to each other I would definitely recommend the longer method.

Also, as a point of information: under no circumstances should an adult glider be housed with a joey that is unknown to it. Adult gliders, both male and female, have been known to antagonize joeys to the point of sending them into shock and that often leads to death. If you have situation like this get used to the idea that it will be necessary to house them separately, to ensure the safety of the joey, until the joey is old enough to fend off this kind of behavior. That means that joey will need to be at least six to seven months old before it is safe. You should allow the glider and the joey to spend supervised time around each other so that they bond with each other and you.

If you bring the gliders near each other and there seems to be no open antagonism, and you see curiosity rather than aggression, you can try introducing them. You should find neutral territory to do this so that territorial instinct does not become an issue. One idea is to sit or stand and put them on you: say one on a shoulder and the other on an arm. You want them to see each other but you don’t want to put them so close that either feels threatened. Then you allow them discover, approach, and meet each other. Watch their reactions as they find each other to see if you see curiosity or aggression. If that goes well I would continue to allow them to be around each other but I would not immediately start housing them together. It is important to remember they will be spending quite a bit of time together when you are not around to intervene. It is always better to error on the side of caution.

You should still house the gliders in separate cages, but put the cages near enough to each other that they can see and smell each other, but too far for them to be able to reach each other. That distance should be no less than 12 inches; gliders see and smell very well. Believe me, if there is another glider anywhere in your home your glider will likely know it. Leave them situated that way for at least a few days if not a week to be sure that they have accepted each other’s presence and are on the road to bonding.

If you bring the gliders near each other and there seems to be open antagonism then I would use this method to try to get them to accept each other.

Note: For purposes of this method of introduction it is better that the gliders are living in pouches in their separate cages.

First, I would house them in separate cages, but put the cages near enough to each other that they can see and smell each other, but too far for them to be able to reach each other. That distance should be no less than 12 inches; gliders see and smell very well. I would leave them like that for a period of one week or more.

Then I would switch their pouches so that each is living in the other’s pouch. I would leave them in this condition for another week or more.

Then I would try the above method of introducing them while paying very close attention to their reactions. If they respond to each other well I would spend a week another week letting them spend time around each other outside the cages, and I would leave their living arrangements as they are for the additional week.

If all has been going well I would wash one pouch and one cage and attempt to house them together. By this time that have come to know each other and there shouldn’t be a problem.

But in either case you want to continue monitoring the new relationship for at least another two weeks before you claim success. You may want to watch them eat to make sure neither is being denied food. If necessary put two food bowls in the cage on different levels or as far away from each other as you can get them until things settles out.

Remember, it can take a couple of days or a couple of weeks to do it right. Usually it’s no big deal and it happens without a lot of problems. But, you do want to be cautious because getting it right the first time usually ensures that there are no problems later.

I believe that in the end all gliders tend to welcome the company so that odds are on your side that it won’t be difficult to make the introductions.